12 Ways to Release Fear and Anger To Heal Arthritis

By Robin Nielsen Uncategorized Feb 23, 2016 No Comments on 12 Ways to Release Fear and Anger To Heal Arthritis 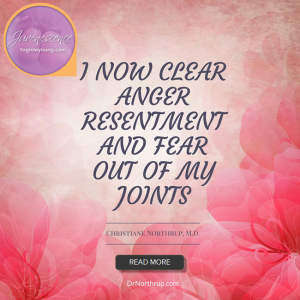 How To Release Your Emotions To Heal Persistent Join Pain

According to the Centers for Disease Control and Prevention, one out of every three Americans – or an estimated seventy million people! — is affected by arthritis. In fact, arthritis is the leading cause of disability in the United States. Arthritis has been around since ancient times. Prehistoric man and even the dinosaurs had it!  It’s a little known fact but Tyrannosaurs (T. rex), suffered from gout, a type of arthritis in which the body generates excess uric acid. It is caused by a diet high in purine, a substance found in red meat. (Other causes of gout are drinking too much alcohol or lead poisoning.)

Many people think that arthritis goes with the territory of aging and that after a certain age it can’t be avoided. As an ageless goddess I am here to tell you that you don’t have to put up with arthritis and the pain and disability it can bring.