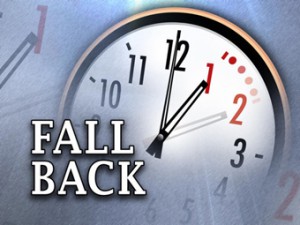 The end of Daylight Saving Time — this year scheduled for Sunday, Nov. 6 — makes people groan and complain, as the sun begins to set earlier and late afternoons grow dark, but researchers say that the return to natural rhythms can be healthy.

“The circadian clock does not change to the social change,” said chronobiology researcher Till Roenneberg of Ludwig Maximilans University in Munich, Germany. “During the winter, there is a beautiful tracking of dawn in human sleep behavior, which is completely and immediately interrupted when daylight saving time is introduced in March.”

Roenneberg, lead researcher for a study of the effects of time shifts, said that humans’ biological clocks are stronger than the clocks set by Congress.

“When you change clocks to daylight saving time, you don’t change anything related to sun time,” Roenneberg said. “This is one of those human arrogances — that we can do whatever we want as long as we are disciplined. We forget that there is a biological clock that is as old as living organisms, a clock that cannot be fooled. The pure social change of time cannot fool the clock.”

Though individuals may see their biological clocks reset, and will get an “extra hour” of sleep or rest over the weekend, researchers say that the stress caused by time changes can be bad for the body.

Researchers in Sweden published a report in 2008 in the New England Journal of Medicine reporting that the number of heart attacks jumps during the period immediately following time changes, and that those vulnerable to sleep deprivation should be extra careful.

“More than 1.5 billion men and women are exposed to the transitions involved in daylight saving time: turning clocks forward by an hour in the spring and backward by an hour in the autumn,” wrote Imre Janszky and Rickard Ljung, health and welfare researchers in Sweden. “These transitions can disrupt chronobiologic rhythms and influence the duration and quality of sleep, and the effect lasts for several days after the shifts.”

Janszky and Ljung said that sleep deprivation can affect the cardiovascular system, leading the vulnerable to have heart problems in the days following Daylight Saving time changes.

The seven-month period of daylight saving time is mandated by governments — not biological clocks — which began implementing the time switch during World Wars I and II to save energy and resources for the war effort. From World War II until recently, daylight saving in the U.S. ran from April until mid-October.

But in 2007, Congress adjusted daylight saving time to begin three weeks earlier and end one week later — a move they hoped would help save energy. At the time, they pointed to the fact that longer daylight in the evening hours reduced people’s need to turn on lights in their homes at night.

Critics of the policy questioned the government’s decision, wondering whether people would simply turn on as many lights in the morning hours instead. In response, the Department of Energy studied the energy savings in 2008. They found that during daylight saving time, U.S. electricity use decreased by 0.5 percent per day, which added up to 1.3 billion kilowatt-hours, enough to power about 122,000 average U.S. homes for a year.

Now, as daylight saving time comes to its November close, energy use will tick up again as the sun sets earlier in the evening.

In the early morning hours of Sunday, Nov. 6, the clocks will be set back an hour, from 2 a.m. to 1 a.m. For an individual who goes to bed at 10 p.m. on Saturday night and awakens eight hours later, they will wake up at 5 a.m. on Sunday morning. It will still be dark, of course, but the sun will come earlier than normal, at 6:30 a.m.